CHICAGO (AP) — The United States will play its final home World Cup qualifier at Orlando, Florida, on March 27 against Panama.

The U.S. Soccer Federation announced Wednesday that the match will be at Exploria Stadium, where the Americans beat Panama 4-0 on Oct.

Weah, back from thigh injury, plays 1st match since Dec 1

American forward Tim Weah ended a seven-week layoff and put himself in better position to make the U.S. roster for upcoming World Cup qualifiers, entering in the 68th minute of Lille's 3-1 win over visiting Lorient on Wednesday night in the French league.

THEN AND NOW: See how World Cup host Russia looked in Soviet times and how it has changed

They are images from what now seems like a different world, black and white glimpses into what was then the USSR...

The cost of attending the World Cup final is up to 46% higher in Qatar than the previous tournament in Russia, fans discovered Wednesday as tickets went on sale.

The steep rise in the prices for the FIFA showpiece match since 2018 contrasts with the group stage — apart from the opening game — and round of 16 seeing a reduction in the cost of the cheapest tickets, which fans can apply for online.

Fans can start registering to buy Qatar World Cup tickets on Wednesday with prices for visitors starting at around $70, one-third cheaper than the tournament in Russia, The Associated Press has learned.

The Mexican Football Federation says any fan caught screaming a homophobic chant at its matches will face a five-year ban from national team games.

Federation President Yon de Luisa said fans buying tickets will have to register their personal information and present a QR Code and identification at stadium entrances.

Giggs’ domestic violence trial set to be after WCup playoffs

MANCHESTER, England (AP) — Suspended Wales coach Ryan Giggs’ trial on charges of domestic violence will not take place before the team plays in the World Cup playoffs in March.

A backlog of cases at Manchester Crown Court means no courtroom is available to take the case until Aug.

Reyna likely out for Dortmund until after qualifying break

Gio Reyna probably won't play for Borussia Dortmund until after the international break, making it unlikely he will make the roster for the United States' next three World Cup qualifiers.

Reyna has not played in any games since injuring his right hamstring during the Americans’ opening qualifier at El Salvador on Sept. 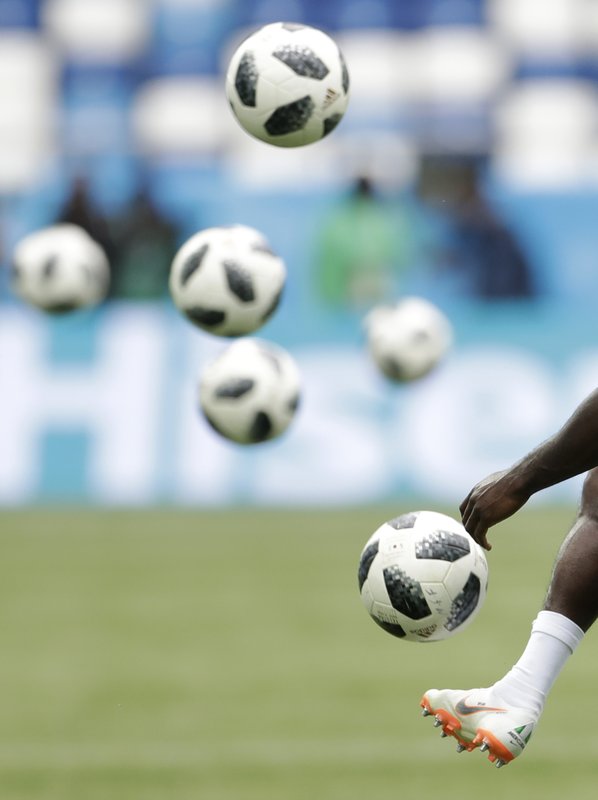 ZURICH (AP) — An amnesty for yellow cards in European qualifying for the World Cup has lifted the threat of suspension for dozens of players involved in the playoffs in March, FIFA said Monday.

UEFA had asked FIFA to help wipe the disciplinary records of players from the 12 European teams involved in the playoffs who were set to carry over a single yellow card collected in group-stage qualifiers.

Nice is three points ahead of third-placed Marseille, which has played two games less and faces defending champion Lille on Sunday night.

MUNICH (AP) — Bayern Munich left back Alphonso Davies has been sidelined with evidence of heart muscle inflammation after being infected with the coronavirus, coach Julian Nagelsmann said Friday.

The Canada international will be out of action for at least “the coming weeks” after the inflammation, known as myocarditis, was detected in a follow-up examination after his return to training this week, Nagelsmann said.

PHOENIX (AP) — Colorado midfielder Cole Bassett has left U.S. training camp following a report he has a deal to be loaned to the Dutch club Feyenoord. 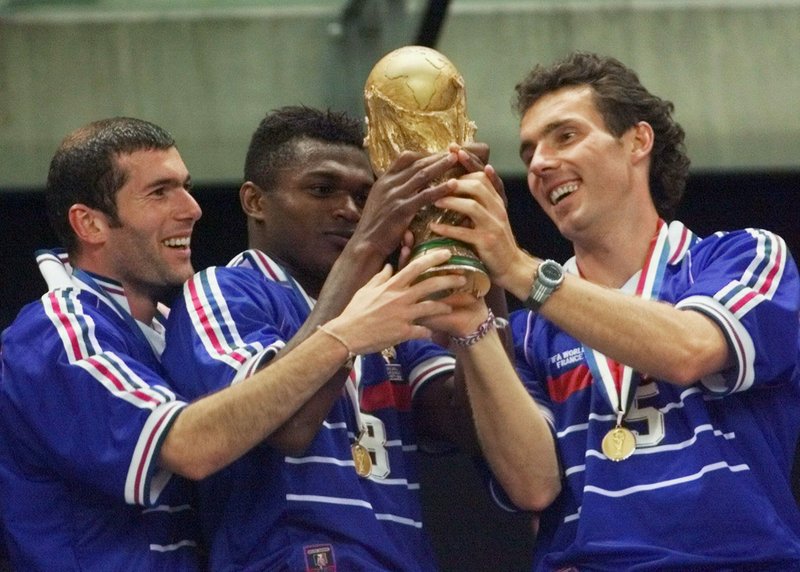 PARIS (AP) — Lionel Messi will miss another game for Paris Saint-Germain after acknowledging that his recovery from COVID-19 has been slower than expected.

Aaron Long works to rejoin US lineup after torn Achilles

Aaron Long thought back to the aftermath of May 15, when he landed awkwardly during an aerial challenge in the New York Red Bulls’ game at Philadelphia.

Two days later, he had surgery to repair a torn right Achilles tendon and started a rehabilitation odyssey that would see him take two trips to Europe.

Dortmund coach Marco Rose said Thursday that the match was too soon for the 19-year old, who has not played in any games since injuring his right hamstring during the Americans' opening qualifier at El Salvador on Sept.

KUALA LUMPUR, Malaysia (AP) — The 2022 Asian Champions League is set to be decided in 2023 with a big split in match schedules for the east and west regions, the Asian Football Confederation said Thursday.

The 36-year-old, whose tiebreaking goal on a 22-yard volley beat Mexico in the 2007 CONCACAF Gold Cup final, had 44 appearances for the U.S., including at the 2010 World Cup.

Midfielder Gio Reyna and forward Tim Weah remain uncertain for the United States' next three World Cup qualifiers, which start Jan. 27 with a match against El Salvador at Columbus, Ohio.

Reyna has not played in any matches since injuring his right hamstring during the opening qualifier at El Salvador on Sept.

ZURICH (AP) — Ivory Coast will be without goalkeeper Sylvain Gbohouo for the African Cup of Nations after he was provisionally suspended by FIFA for doping.

The governing body of soccer confirmed Gbohouo’s suspension on Tuesday, a day before Ivory Coast plays its opening game of the tournament against Equatorial Guinea.

TURIN, Italy (AP) — Juventus winger Federico Chiesa will undergo surgery after damaging the anterior cruciate ligament in his left knee, the club said Monday, potentially ruling him out of the World Cup playoffs for Italy in March.

By The Associated PressJanuary 8, 2022 GMT

American forward Matthew Hoppe returned from an injury layoff of more than two months, entering in the 74th minute of Mallorca's 2-0 loss at Levante on Saturday in the Spanish league.

The 20-year-old from Yorba Linda, California, had not played for Mallorca since Sept.

CHESTER, England (AP) — Manchester City player Benjamin Mendy was released from prison on bail on Friday while his trial on rape charges was put back until June at the earliest.

Mendy, who remained suspended by City, was in custody for 134 days, since first being arrested and charged on Aug.

João Pedro needed FIFA permission to change national eligibility after playing for Brazil at Under-17 level.

COPENHAGEN, Denmark (AP) — Christian Eriksen is targeting a comeback from his cardiac arrest to play for Denmark in the World Cup in November.

The 29-year-old Eriksen has not played since collapsing during Denmark’s opening match at the European Championship against Finland in June.

Qatar wants to attract 1.2 million people to the World Cup but will struggle to accommodate many of them.

With ticket sales beginning in January, supporters are in for a shock when they look for somewhere to stay: Qatar already looks sold out.

The 40 year old was interim head coach of Major League Soccer's Colorado Rapids in 2019, taking over after a start that included seven losses and two draws in nine matches.

FIFA touts billions to be gained from biennial World Cups

LONDON (AP) — Money talked loudest and clearest when FIFA pitched to more than 200 member countries Monday for its biennial World Cups plan that is opposed by leaders of European and South American soccer plus the Olympics.

CARSON, Calif. (AP) — Cole Bassett wrote down his two main goals for the U.S. national team's two-week December camp and left them sitting on his bed so he would see them every day.

“Make my debut, and score a goal,” Bassett recalled.

The 45-year-old Ronaldo, a two-time World Cup winner, and club president Sergio Santos Rodrigues said on Saturday through social media that there was an agreement in principle to buy the club.

Morris set to make US return Saturday in friendly vs Bosnia

CARSON, Calif. (AP) — Forward Jordan Morris is likely to play his first U.S. national team match in more than two years when the Americans face Bosnia and Herzegovina in an exhibition on Saturday.

NYON, Switzerland (AP) — Italy and England were drawn in the same Nations League group Thursday, setting up two rematches next year of their European Championship final.

The group also includes Germany and Hungary, with teams playing each other at home and away between June and September.

MLS will jumpstart 2022 season ahead of World Cup in Qatar

NEW YORK (AP) — Major League Soccer's regular season will start earlier than ever before in 2022 so play is wrapped up before the World Cup kicks off in Qatar.

PARIS (AP) — Human rights activists in France have urged the country’s soccer officials to pay attention to rights violations of migrant workers in Qatar a year before the World Cup.

GAUHATI, India (AP) — Police in India's northeastern state of Assam Saturday said they have recovered a stolen watch that once belonged to the Argentine soccer legend Diego Maradona.

Assam state police chief Bhaskar Jyoti Mahanta said the luxury Hublot watch signed by Maradona was recovered from a man's possession after he was arrested from his home in the district of Sivasagar, 350 kilometres (217 miles) east of Gauhati, the state capital.

By The Associated PressDecember 10, 2021 GMT

Theodore Whitmore is out as Jamaica's national soccer coach, seven weeks before the Reggae Boyz resume World Cup qualifying and try to climb back into contention for a berth in next year's tournament.

US World Cup qualifier Jan. 30 at Canada to kick off at 3

By The Associated PressDecember 9, 2021 GMT

The United States' World Cup qualifier against Canada in Hamilton, Ontario, on Jan. 30 will kick off at 3 p.m. EST.

TROMSO, Norway (AP) — A Norwegian soccer club collaborated with Amnesty International and a former migrant worker in Qatar to launch a jersey Monday that highlights the human rights violations taking place in the host country of next year’s World Cup.

Gregg Berhalter thinks American players will adjust to a freeze with ease.

The U.S. picked Columbus, Ohio, for its World Cup qualifier against El Salvador on Jan. 27 and St. Paul, Minnesota, for its Feb.

The German soccer federation said Eckel died Friday. It did not give a cause of death.

Protests by South Africa and Benin dismissed by FIFA

ZURICH (AP) — Protests by South Africa and Benin regarding incidents during last month's World Cup qualifying games were dismissed by FIFA on Friday, confirming that Ghana and Congo have advanced to the playoff round.

The Chinese Football Association said Friday that Li had resigned and was being replaced by fellow former national team player Li Xiaopeng.

LONDON (AP) — Aggression by England fans at the European Championship final exposed an “embarrassing" part of the national culture that endangered lives and should lead to fans being barred from stadiums if they are chanting abuse and under the influence of drugs or alcohol, an investigation into the disorder has concluded.

GENEVA (AP) — The group representing Europe’s top soccer clubs expressed “deep concerns” on Thursday about the health risks to players traveling worldwide in January for national team games like at the African Cup of Nations.