SHEBOYGAN, Wis. (AP) — The first point of the Ryder Cup belonged to Europe and its fearsome new Spanish Armada. The rest of the opening session belonged to the Americans, just like usual.

Patrick Cantlay and Xander Schauffele, tough as ever in foursomes, won the first five holes and closed with four straight birdies for a 5-and-3 victory over Rory McIlroy and Ian Poulter.

SHEBOYGAN, Wis. (AP) — The Latest on the Ryder Cup (all times CDT):

The United States took a 6-2 lead for its largest opening-day advantage at the Ryder Cup since 1975.

SHEBOYGAN, Wis. (AP) — Sergio Garcia blew a kiss to the crowd. Jon Rahm couldn't stop smiling. It was all part of a high-fiving, back-slapping, magic-filled morning for the Ryder Cup's latest iteration of the Spanish Armada.

Coach: McCaffrey out ‘a few weeks’ with hamstring injury

Panthers coach Matt Rhule said Friday that the 2019 All-Pro running back is expected to miss “a few weeks” with a strained hamstring. 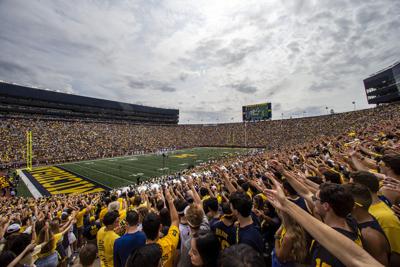 The AP college football is the longest-running poll of those that award national titles at the end of the season.

CLEVELAND (AP) — There's no more debate or decisions forthcoming. There's still some anger and disbelief, but also the excitement that comes along with change.

There are all sorts of storylines swirling around the Las Vegas Raiders.

They go into Sunday's game against Miami looking for their first 3-0 start in almost two decades. Quarterback Derek Carr is playing like an MVP.

CHICAGO (AP) — An attorney who represents a former Chicago Blackhawks player who alleges he was sexually assaulted by a then-assistant coach in 2010 said Friday her client has been interviewed as part of the team’s review of the accusations.

CHICAGO (AP) — The surging St. Louis Cardinals soared to their 13th straight win Friday, using homers by Paul Goldschmidt and Tyler O’Neill to top the Chicago Cubs 8-5 in the opener of a doubleheader.

Analysis: Enough taunting - from social media and fans, too

That's not just meant for NFL players. The overreaction on social media and among broadcast pundits to the NFL's point of emphasis on the topic has been, well, as nasty as some of the deeds and comments on the field.

LONG BEACH, Calif. (AP) — Jimmie Johnson fulfilled a childhood dream Friday when the 46-year-old IndyCar rookie at long last got to drive a race car on his home track.

Johnson is a superstar with seven NASCAR championships but he grew up an open-wheel fan from El Cajon who idolized Rick Mears.

After threats, killings, no fans at rivalry football game

CHICAGO (AP) — A football game between two rival Chicago schools will be played without spectators Saturday, capping a tumultuous week of threats and the fatal shootings of two students.

Simeon Career Academy and Phillips Academy will play with empty seats at Gately Stadium in the Pullman neighborhood.

LONG BEACH, Calif. (AP) — Endless hours on iRacing trying to familiarize himself with the downtown city street course in Long Beach paid off Friday when IndyCar points leader sailed through his first career laps on the circuit.

MIAMI GARDENS, Fla. (AP) — The Miami Dolphins will be without outside linebackers coach Rob Leonard for Sunday’s game at Las Vegas because of COVID-19 protocols.

The Dolphins made the announcement Friday and said his responsibilities “will be shared amongst the defensive staff.” Leonard’s status for Miami’s preparations next week leading into an Oct.

Amid injuries, Cowboys try to be coy about rookie Parsons

FRISCO, Texas (AP) — The Dallas Cowboys don't want to give away where Micah Parsons will line up after the versatile rookie linebacker played almost exclusively as a pass rusher in the second game of his career following a midweek switch.

LAS VEGAS (AP) — Former UFC champion Jon Jones was jailed in Las Vegas early Friday after an incident at Caesars Palace that police said led to his arrest on charges of domestic battery and damaging a vehicle.

KAILUA-KONA, Hawaii (AP) — The Ironman World Championship will be held outside Hawaii for the first time in four decades because of uncertainty over whether the Big Island will be able to host the triathlon as scheduled in February during the coronavirus pandemic.

The Poland star’s club-record scoring streak for Bayern Munich ended at 19 consecutive games on Friday when he failed to get a goal in his team’s 3-1 win at last-placed Greuther Fürth in the Bundesliga.

ENGLEWOOD, Colo. (AP) — Malik Reed missed practice Friday to deal with a personal issue but will be back this weekend to resume his role as the Denver Broncos' ultimate fill-in.

It's hard to think of the third-year outside linebacker as a backup — he's started more games (22) than either Von Miller (17) or Bradley Chubb (19) since entering the league as an undrafted free agent out of Nevada in 2019.

Grosjean to run full season, and Indy 500, for Andretti

LONG BEACH, Calif. (AP) — The love affair between Romain Grosjean and IndyCar will continue for another two years. The Frenchman will move to Andretti Autosport in 2022 under a two-year contract announced Friday that includes the Indianapolis 500.

THOUSAND OAKS, Calif. (AP) — Los Angeles Rams running back Darrell Henderson will be a game-time decision against the Tampa Bay Buccaneers on Sunday.

Coach Sean McVay said Henderson’s availability would likely depend on pain tolerance after hurting his ribs on the first play of the fourth quarter in the Rams’ 27-24 win at Indianapolis.

The AL East-leading Rays, who started a three-game series with Miami on Friday night, clinched a postseason spot on Thursday.

For the latest odds, go to FanDuel Sportsbook, https://sportsbook.fanduel.com/

OPENING LINE: Broncos by 10½, according to FanDuel SportsBook.

Running back Tevin Coleman was ruled out Friday for the game against the Broncos on Sunday with a non-COVID-19 illness.

Indians activate Bieber from IL to start against White Sox

CLEVELAND (AP) — The Cleveland Indians have activated right-hander Shane Bieber from the 60-day injured list for a start Friday night against the Chicago White Sox.

Bieber, who won the AL Cy Young Award last season, hasn’t pitched since June 13 because of a strained right shoulder.

COSTA MESA, Calif. (AP) — Asante Samuel Jr. is quickly showing that being a starting cornerback as a rookie isn’t too big for him.

The Los Angeles Chargers' second-round draft pick has played well in his first two games, including an interception in last week’s 20-17 loss to the Dallas Cowboys.

GREENBURGH, N.Y. (AP) — The New York Knicks' entire roster is vaccinated, making all the players eligible to play in their home games.

Because of local coronavirus regulations in New York and San Francisco, the Knicks, Brooklyn Nets and Golden State Warriors are required to be vaccinated unless exemptions for medical or religious reasons apply.

OPENING LINE: Steelers by 3, according to FanDuel SportsBook.

NASHVILLE, Tenn. (AP) — Tennessee left tackle Taylor Lewan practiced fully all week and is set to play Sunday against the Indianapolis Colts after being scratched for the Titans' win in Seattle.

Chennai top of IPL after 6-wicket win against Bangalore

Chennai won a sandstorm-delayed toss and chose to field at Sharjah Cricket Stadium, restricting Bangalore to 156-6 despite a promising start for Virat Kohli's team.

UNITED NATIONS (AP) — At a U.N. General Assembly meeting packed with global gloom, Japan's outgoing leader highlighted what he cast as a moment of inspiration: the Tokyo Olympics, controversially held in the middle of the coronavirus pandemic.

BERLIN (AP) — It already promises to be a Berlin Marathon unlike any other.

The world’s fastest marathon returns on Sunday after its forced one-year absence. Organizers are claiming it is the biggest marathon in the world since the coronavirus pandemic began.

OSTRAVA, Czech Republic (AP) — Top-seeded Iga Swiatek of Poland advanced to the semifinals of the Ostrava Open on Friday after beating seventh-seeded Elena Rybakina of Kazakhstan 7-6 (5), 6-2.

The star Browns wide receiver made it full through a full week of practice without any issues with his reconstructed knee and coach Kevin Stefanski said Friday that Beckham will make his return Sunday against the Chicago Bears.

Capsules from 1st day of the Ryder Cup at Whistling Straits

SHEBOYGAN, Wis. (AP) — A capsule look at Friday's matches in the Ryder Cup:

COUNCIL GROVE, Kan. (AP) — An assistant coach for a youth football team in Kansas is facing misdemeanor charges for allegedly pushing a player to the ground.

Adam Dirks is charged with battery for an incident that happened Sept.

PITTSBURGH (AP) — Pittsburgh Steelers quarterback Ben Roethlisberger will play on Sunday against Cincinnati, while star outside linebacker T.J. Watt is questionable due to a groin injury.

Roethlisberger was a full participant in practice on Friday after being limited on Thursday while dealing with a bruised chest suffered in a loss to Las Vegas last week.

CHARLOTTE, N.C. (AP) — Normally teams would be fired up after starting the season 3-0.

LONDON (AP) — European clubs joined forces on Friday to rebuke FIFA for trying to railroad through plans for biennial World Cups, warning of a destructive impact on world football.

FIFA President Gianni Infantino has infuriated the European Club Association, which is accusing the global governing body of being in breach of legal obligations with its rush to radically overhaul the sport and gain more control.

FLORHAM PARK, N.J. (AP) — Michael Carter stands out on the football field — and it’s not just because of his elusive moves.

The New York Jets rookie running back is always bouncing around with a child-like exuberance that rubs off on his teammates.

RIO DE JANEIRO (AP) — Brazil called up eight English Premier League players on Friday for World Cup qualifiers while hoping to avoid a repeat of farcical scenes which saw health officials come on the field to interrupt the team's match against Argentina earlier this month.

Massage therapist gets 25 years to life for sex crimes

LAWRENCE, Kan. (AP) — A judge has sentenced a massage therapist to three prison terms of 25 years to life for several sex crimes against five people, including a child and three female soccer players at the University of Kansas.

ADVERTISEMENT
All contents © copyright 2021 The Associated Press. All rights reserved.