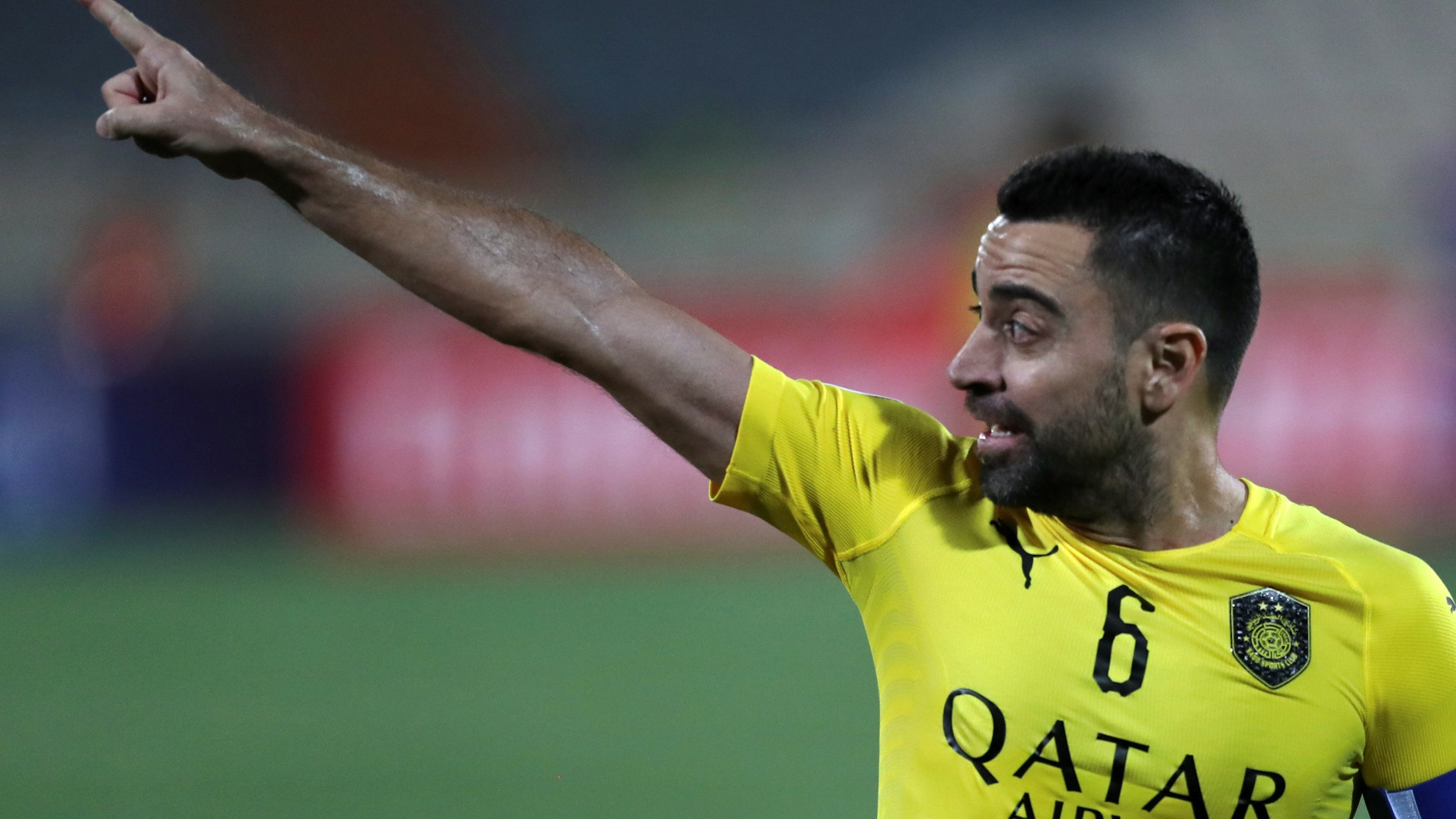 The PGA Tour has filed a counterclaim against Saudi-funded LIV Golf accusing the rival league of inducing top players to breach PGA Tour contracts by claiming the tour could not enforce them.

The counterclaim was included in the PGA Tour's response to the amended antitrust lawsuit filed in federal court in northern California, which included LIV Golf as a plaintiff.

GENEVA (AP) — Fans going to the World Cup in Qatar must show a negative COVID-19 test when they arrive as part of the host nation’s rules to combat COVID-19, organizers said Thursday.

GENEVA (AP) — Denmark will wear team jerseys at the World Cup that protest the human rights record of host nation Qatar, with a black option unveiled Wednesday to honor migrant workers who died during construction work for the tournament.

By The Associated PressSeptember 27, 2022 GMT

The United States will limp into the World Cup, and not just because of all the Americans' injuries.

The U.S. played a 0-0 draw against Saudi Arabia on Tuesday night at Murcia, Spain, that was somewhere between unimpressive and alarming.

Qatar tests out massive bus fleet ahead of World Cup

DOHA, Qatar (AP) — Qatar has tested out a massive fleet of buses ahead of next month's World Cup, when an estimated 1.2 million soccer fans will descend on the small Gulf nation, an official said Tuesday.

US coach Berhalter: ‘We got our butts kicked’ by Japan

By The Associated PressSeptember 26, 2022 GMT

Christian Pulisic and Ricardo Pepi will join the U.S. starting lineup for the Americans' last World Cup warmup against Saudi Arabia on Tuesday night after coach Gregg Berhalter admitted “we got our butts kicked” by Japan last week.

BERLIN (AP) — Qatar’s ambassador to Germany was urged Monday to abolish his country’s penalties for homosexuality at a human rights congress hosted by the German soccer federation two months before the Middle East country stages the World Cup.

Mbappe stars for France; wins for Croats, Dutch and Belgians

The club said Thursday it will not give any coverage to the tournament because of the difficulty in providing what it says is the “urgently required analytical commentary contextualizing the sporting events” in the Middle East country.

Lord’s will host the final in 2025, the International Cricket Council added on Wednesday.

ICC permanently bans use of saliva to polish cricket ball

DUBAI, United Arab Emirates (AP) — The ICC permanently banned the use of saliva to polish the ball in international cricket on Tuesday as it made a host of changes to playing conditions.

It’s been more than two years since the International Cricket Council banned the use of saliva as a COVID-19 related temporary measure but the game’s governing body now says, “it is considered appropriate for the ban to be made permanent.”

DUBAI, United Arab Emirates (AP) — Sri Lanka’s inexperienced cricket team overcame a poor start with bat and ball to put on an impressive all-round show Sunday and win the Asia Cup for the sixth time with a 23-run victory over Pakistan.

NEW YORK (AP) — Ons Jabeur dropped her racket in disgust after one poor shot in the U.S. Open final. Minutes later, she was on the court right along with it after lunging to hit a volley that flew out of bounds.

Spinners inspire Sri Lanka to win over Pakistan before final

DUBAI, United Arab Emirates (AP) — Sri Lanka choked Pakistan through its spinners then opening batter Pathum Nissanka hit an unbeaten half-century to set up a five-wicket win in the Asia Cup on Friday.

DUBAI, United Arab Emirates (AP) — Virat Kohli recorded his first international hundred in nearly three years as India bowed out of the Asia Cup with a massive 101-run win over Afghanistan on Thursday.

DOHA, Qatar (AP) — FIFA promised Wednesday to stage free concerts with international stars for visitors to the official Fan Festival in Qatar during the World Cup.

TEHRAN, Iran (AP) — Carlos Queiroz was rehired as Iran coach on Wednesday to take the national soccer team to its third straight World Cup, where the squad will face the United States, England and Wales.

DUBAI, United Arab Emirates (AP) — Sri Lanka stunned India with yet another aggressive run-chase in the Asia Cup and recorded a six-wicket win in the Super 4 on Tuesday.

Half centuries by opening pair of Kusal Mendis (57) and Pathum Nissanka (52) led Sri Lanka to 174-4 for its third straight successful run-chase of 170-plus in the tournament.

Survivor of Holocaust, Munich attack heads back to Germany

BERGEN-BELSEN, Germany (AP) — They call him the ultimate survivor: Shaul Ladany lived through a Nazi concentration camp and escaped the massacre of 11 fellow Israeli athletes at the 1972 Olympic Games in Munich.

BOLTON, Mass. (AP) — Dustin Johnson gave LIV Golf its first big moment Sunday when he made a 35-foot eagle putt on the first hole of a sudden-death playoff to win the LIV Golf Invitational-Boston for his first victory in 19 months.

DUBAI, United Arab Emirates (AP) — Mohammad Rizwan smashed his second successive half century and Mohammad Nawaz made 42 off just 20 balls to set up Pakistan’s highest successful run-chase in a Twenty20 against archrival India in their Asia Cup Super 4 match on Sunday.

BOLTON, Mass. (AP) — Talor Gooch had a 5-under 65 on a day of low scoring and most players wearing shorts, building a one-shot lead Saturday over newcomer Joaquin Niemann after two rounds of the LIV Golf Invitational-Boston.

Danushka Gunathilaka (33) and Bhanuka Rajapaksa (31) profited from dropped catches to carry Sri Lanka to a winning 179-6 with five balls to spare and avenge a heavy loss to the Afghans in the group stage.

GENEVA (AP) — Organizers of the World Cup in Qatar have finalized a policy to serve beer with alcohol to soccer fans at stadiums and fan zones in the Muslim-majority country.

BOLTON, Mass. (AP) — Matthew Wolff became a footnote in LIV Golf history with the first hole-in-one, an ace that carried him to a 7-under 63 and a one-shot lead over a pair of newcomers Friday in the LIV Golf Invitational-Boston.

DUBAI, United Arab Emirates (AP) — Sri Lanka pulled off a sensational two-wicket victory over Bangladesh and advanced to the Super 4 stage of Asia Cup on Thursday.

In a must-win last Group B game, Sri Lanka's tailenders held their nerves to reach 184-8 for their second-highest successful run-chase in a T20 international.

TEHRAN, Iran (AP) — Iran on Thursday put the FIFA World Cup trophy on display for the first time, part of the trophy’s global tour ahead of the tournament that kicks off in neighboring Qatar in November.

The UAE said in a statement those registered for Qatar’s Hayya fan card will be able to apply for multiple-entry visas 19 days before the tournament starts.

SHARJAH, United Arab Emirates (AP) — High-flying Afghanistan rattled Bangladesh through its spinners to notch a convincing seven-wicket victory and a berth in the Super 4 of the Asia Cup on Tuesday.

British Open champion Cameron Smith and Joaquin Niemann are among six players to leave the PGA Tour for Saudi-funded LIV Golf, which returns this week for a fourth tournament, this time outside of Boston.

Pandya gets 5-wicket win for India v Pakistan; Kohli back

TEHRAN, Iran (AP) — In a rare move, authorities in Iran allowed women to attend a soccer game at the Tehran Azadi stadium in the Iranian capital on Thursday evening, local media reported.

Videos posted on social media show women inside the stadium as the national league game between Esteghlal FC, the second most popular team in Iran, and Mes-e Kerman kicked off.

DUBAI, United Arab Emirates (AP) — Saudi Arabia will grant visas to those holding tickets to the World Cup in neighboring Qatar, the kingdom has announced.

The Saudi Foreign Ministry said in a statement late Wednesday those registered for Qatar's Hayya fan card will be able to apply for multiple-entry visas 10 days before the tournament starts.

KING ABDULLAH SPORTS CITY, Saudi Arabia (AP) — Oleksandr Usyk kissed the blue-and-yellow flag of Ukraine and looked to the Saudi Arabian sky as he waited to discover if he had honored his war-torn country by retaining his world heavyweight titles.

SAN JOSE, Calif. (AP) — Players from Saudi-funded LIV Golf who have filed an antitrust lawsuit against the PGA Tour will be waiting nearly 16 months for the case to go to trial.

FIFA said 520,000 tickets were bought in a first-come, first-served phase of sales that closed this week.

Usyk fighting for Ukraine, Joshua for future in rematch

Dressed in traditional Cossack clothing, Oleksandr Usyk followed up his face-off with Anthony Joshua by performing a Ukrainian resistance song on stage.

Clapping his hands rhythmically, Usyk — with a horseshoe mustache and those steely eyes of his — broke into “Oi u luzi chervona kalyna,” a song from 1875 inspired by Ukraine’s 18th-century struggle for independence and now chanted in defiance amid the war with Russia.

WILMINGTON, Del. (AP) — A draft contract to play for Saudi-funded LIV Golf includes clauses that require players be available to recruit other players to the league and to get permission before granting exclusive interviews, The Wall Street Journal reported Wednesday.

BELFAST, Northern Ireland (AP) — George Dockrell edged Ireland to a T20 international series victory over Afghanistan in a tense conclusion to a rain-affected decider in Belfast.

Dockrell hit the decisive run as the home side clinched a 3-2 win by seven wickets after reaching a reduced target of 56 with two balls of their seven allotted overs to spare.

Twelve full ICC members will play a total of 777 matches in all formats during the 2023-27 FTP cycle.

BERLIN (AP) — Palestinian President Mahmoud Abbas expressed no regret Tuesday for the deadly attack by Palestinian militants on Israeli athletes at the Munich Olympics a half century ago, countering that Israel had committed “50 Holocausts” against Palestinians over the years.

World Cup Watch: Jesus out to reclaim Brazil’s No. 9 jersey

It's one of the biggest honors in soccer: Playing as the center forward for Brazil at a World Cup.

GENEVA (AP) — FIFA has formally moved the World Cup start up by one day to give host nation Qatar an exclusive Sunday evening slot with a global audience.

ISLAMABAD (AP) — Pakistan captain Babar Azam is backing Hasan Ali to return to international cricket after the fast bowler was dropped for the one-day international series against the Netherlands and the T20 Asia Cup.

GENEVA (AP) — Host nation Qatar is set to play in the opening game of its own World Cup tournament after all — and on a stand-alone day being added to the schedule barely 100 days before kickoff.

Soccer's marquee tournament is now set start one day earlier than originally scheduled seven years ago in a move that would allow Qatar to play Ecuador on Nov.

SAN JOSE, Calif. (AP) — A federal judge in California ruled Tuesday that three golfers who joined Saudi-backed LIV Golf will not be able to compete in the PGA Tour's postseason.

U.S. District Judge Beth Labson Freeman made her decision in San Jose after attorneys for the sides each spoke for about an hour.