Apollo 11 at 50: Celebrating first steps on another world

CAPE CANAVERAL, Fla. (AP) — A half-century ago, in the middle of a mean year of war, famine, violence in the streets and the widening of the generation gap,

CAPE CANAVERAL, Fla. (AP) — A space capsule hurtled toward the moon Wednesday for the first time in 50 years, following a thunderous launch of NASA’s mightiest rocket in a dress rehearsal for astronaut flights.

CAPE CANAVERAL, Fla. (AP) — NASA is kicking off its new moon program with a test flight of a brand-new rocket and capsule.

Liftoff was slated for early Wednesday morning from Kennedy Space Center in Florida.

NASA’s moon rocket returns to pad for next launch attempt

CAPE CANAVERAL, Fla. (AP) — NASA’s moon rocket is back on the pad for another launch attempt, following more repairs.

The 322-foot (98-meter) rocket departed its hangar in the middle of the night and completed the 4-mile (6.4-kilometer) trip shortly after sunrise Friday.

WASHINGTON (AP) — James A. McDivitt, who commanded the Apollo 9 mission testing the first complete set of equipment to go to the moon, has died. He was 93.

McDivitt was also the commander of 1965’s Gemini 4 mission, where his best friend and colleague Ed White made the first U.S.

CAPE CANAVERAL, Fla. (AP) — NASA called off the launch of its mighty new moon rocket on its debut flight with three test dummies aboard Monday after a last-minute cascade of problems culminating in unexplained trouble related to an engine.

NASA moon rocket on track for launch despite lightning hits

CAPE CANAVERAL, Fla. (AP) — NASA’s new moon rocket remained on track to blast off on a crucial test flight Monday, despite a series of lightning strikes at the launch pad.

The 322-foot (98-meter) Space Launch System rocket is the most powerful ever built by NASA.

CAPE CANAVERAL, Fla. (AP) — Years late and billions over budget, NASA’s new moon rocket makes its debut next week in a high-stakes test flight before astronauts get on top.

The 322-foot (98-meter) rocket will attempt to send an empty crew capsule into a far-flung lunar orbit, 50 years after NASA's famed Apollo moonshots.

The 322-foot (98-meter) rocket emerged from its mammoth hangar late Tuesday night, drawing crowds of Kennedy Space Center workers, many of whom were not yet born when NASA sent astronauts to the moon a half-century ago.

NEW YORK (AP) — Buzz Aldrin's jacket worn on his historic first mission to the moon's surface in 1969 has been auctioned off to a bidder for nearly $2.8 million.

A new lunar rover is under development by Lockheed Martin and Goodyear as NASA gears up for a return to the moon.

NASA will attempt the more than month-long lunar test flight with three mannequins, but no astronauts, as early as Aug.

CAPE CANAVERAL, Fla. (AP) — For the first time, scientists have grown plants in soil from the moon collected by NASA’s Apollo astronauts.

Researchers had no idea if anything would sprout in the harsh moon dirt and wanted to see if it could be used to grow food by the next generation of lunar explorers.

NEW YORK (AP) — Bike rides, kickball, Jiffy Pop, Jell-O and other well-remembered details crowd Richard Linklater’s “Apollo 10 1/2: A Space Age Childhood,” an affectionate ode to his own childhood growing up outside Houston in the late 1960s.

The geniuses at NASA accidentally build the lunar module a little too small for an adult in “Apollo 10½: A Space Age Childhood.” In Richard Linklater’s first foray into animation since “A Scanner Darkly,” a few fast-talking NASA men (Glen Powell and Zachary Levi) recruit an average local elementary school student, Stan, to test it out for them on a top secret mission to the Moon.

They both carved out sterling reputations as military and political leaders over years of public service. But both also saw their legacies tarnished by their actions in the long, bloody war in Iraq.

Missing moon rock from Apollo 17 mission back in Louisiana

BATON ROUGE, La. (AP) — Louisiana has recovered a missing lunar rock gifted to the state to commemorate the last manned U.S. mission to the moon after it turned up in the hands of a man who recycles wooden plaques.

Podcast revisits how the biggest stories unfolded on TV news

NEW YORK (AP) — For a broadcast journalist, they are the moments that MSNBC's Brian Williams says you can almost feel people watching you.

Planes crash into the World Trade Center. A president is assassinated.

60 years since 1st American in space: Tourists lining up

CAPE CANAVERAL, Fla. (AP) — Sixty years after Alan Shepard became the first American in space, everyday people are on the verge of following in his cosmic footsteps.

Jeff Bezos’ Blue Origin used Wednesday's anniversary to kick off an auction for a seat on the company's first crew spaceflight — a short Shepard-like hop launched by a rocket named New Shepard...

Apollo 11 astronaut Michael Collins, who orbited the moon alone while Neil Armstrong and Buzz Aldrin made their historic first steps on the lunar surface, died Wednesday...

China spacecraft lands on moon to bring rocks back to Earth

BEIJING (AP) — A Chinese spacecraft sent to return lunar rocks to Earth collected its first samples Wednesday after landing on the moon, the government announced, adding to a string of successes for Beijing's increasingly ambitious space program...

CAPE CANAVERAL, Fla. (AP) — President Donald Trump’s plan to celebrate the first space launch of American astronauts from U.S. soil in nearly a decade on Wednesday hit a snag when the mission was postponed at the last minute because of bad weather...

CAPE CANAVERAL, Fla. (AP) — Apollo 13′s astronauts never gave a thought to their mission number as they blasted off for the moon 50 years ago...

HAMPTON, Va. (AP) — The Hampton City Council has voted to place the name of Apollo 11 astronaut Neil Armstrong on a road which had been named for a Confederate general...

HAMPTON, Va. (AP) — The Hampton City Council is considering a resolution that would change a street named for a Confederate general to one named for Apollo 11 astronaut Neil Armstrong, the first man to walk on the moon...

HUTCHINSON, Kan. (AP) — The family of astronaut Neil Armstrong, the first man to step on the moon, has donated two items that were aboard the Apollo 11 mission in 1969 to the Cosmosphere space museum in Hutchinson...

CAPE CANAVERAL, Fla. (AP) — A top NASA manager cast doubt Wednesday on the space agency's ability to land astronauts on the moon by 2024...

After first steps on moon, crew welcomed home with aloha

HONOLULU (AP) — Neil Armstrong, Edwin "Buzz" Aldrin and Michael Collins' trip to the moon concluded with a stay in Hawaii...

COLUMBUS, Ohio (AP) — The moon may be made of cheese, but these astronauts are made of butter.

The Ohio State Fair is commemorating the 50th anniversary of the moon landing with life-size butter sculptures of Neil Armstrong and his fellow astronauts...

VATICAN CITY (AP) — Pope Francis is hoping that the 50th anniversary of the first moon walk inspires efforts to help our "common home" on Earth...

MOONSTRUCK: One giant leap for mankind

I was working at Longview Fibre Co. in San Leandro, California, as a “glue boy” and bundler putting together cardboard boxes for Green Giant Co-ops and much bigger boxes for the Central Valley lettuce growers.

Love astronaut-themed science fiction? Here’s a list of some beloved books, movies and TV shows of that genre

All this reporting and writing about the moon landing’s 50th anniversary got us in the mood to read and watch some science fiction. So here are our staffers’ picks for some of their favorite astronaut-themed science fiction books, movies and TV shows.

Kennedy, Armstrong and the Age of Aquarius

In the summer of 1969, men from the planet Earth first set foot on an Outer World. Our moon, for so long the subject of wonder, song and poetry, became something touched by humanity and forever changed our perception of space.

The greatest testament to the audacity of man’s landing on the moon, 50 years ago today, is that it still inspires not only those who were alive to see it on their flickering 19-inch black and white television screens, but later generations for whom high technology is a given.

When NASA hired Frances “Poppy” Northcutt as a “computeress” in 1965, many credited both NASA and her with breaking down gender walls because she was the first woman to work in the Mission Control program that oversaw Apollo space expeditions. 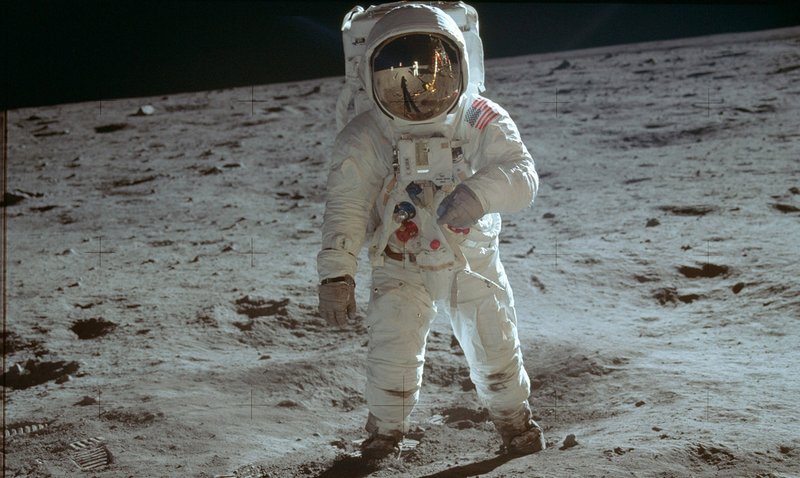 The moon landing was a giant leap for movies, too

NEW YORK (AP) — In 1964, Stanley Kubrick, on the recommendation of the science-fiction author Arthur C...

Memories of watching Apollo 11: ‘You could hear a pin drop’

NEW YORK (AP) — When Neil Armstrong and Buzz Aldrin took their first steps on the moon in 1969, the world was watching...

CAPE CANAVERAL, Fla. (AP) — Apollo 11 astronaut Michael Collins returned Tuesday to the exact spot where he flew to the moon 50 years ago with Neil Armstrong and Buzz Aldrin...

What did Neil Armstrong really say when he took his first step on the moon?

Millions on Earth who listened to him on TV or radio

Armstrong, Aldrin were first of 12 men to walk on the moon

During the Apollo space program, 12 men walked on the moon from 1969 to 1972. Neil Armstrong was the first and Gene Cernan was the last to leave the lunar surface...