Boris Johnson prepares to take his place on world stage

LONDON (AP) — British Prime Minister Boris Johnson, who has endeavored to lead his country since he was a boy, will get his first moment on the world stage in his new role at the Group of Seven summit in France this weekend. And he will be at pains to ensure it won’t be his last.

The man who has said his life’s ambition as a child was to be “world king” could be the shortest-serving prime minister in British history if he fails in his high-stakes gambit to force the European Union to reopen Brexit talks.

As Johnson prepares to meet with world leaders, including U.S. President Donald Trump, at the seaside resort of Biarritz, opponents at home are plotting to bring him down with a no-confidence vote after Parliament returns from its summer recess next month.

Johnson, 55, who took power last month, is betting his political future on a promise to lead Britain out of the EU on Oct. 31, with or without an agreement. He says the threat of a no-deal Brexit is the only way to force the EU into making concessions. 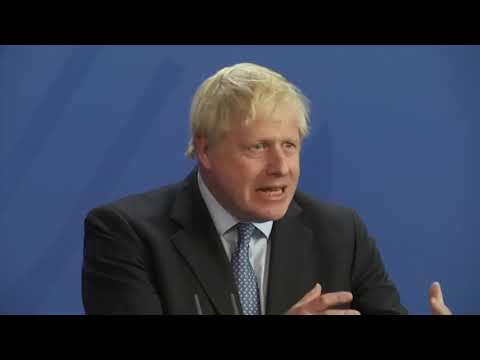 But the G7 summit comes at the end of a week when Johnson has had to face the reality that the EU isn’t blinking despite his efforts to keep talking up the potential for a no-deal Brexit. That leaves Johnson stuck in a political vise at home.

While the no-deal pledge has helped Johnson win the backing of hardliners in his Conservative Party, they could withdraw their support if the newly minted prime minister fails to deliver. At the same time, opposition leaders claim a no-deal approach is a reckless policy that will lead to shortages of food, medicine and fuel, damaging the economy and hurting the country’s poorest people.

The Brexit battle has already claimed two prime ministers in a country that is deeply divided over the nature of its ties to Europe. David Cameron resigned in June 2016, the day after Britain narrowly voted in favor of leaving the EU. His successor, Theresa May, was forced to step down last month after Parliament rejected her withdrawal deal three times.

The main sticking point in that deal was the so-called Irish backstop, designed to prevent the return of customs checks on the border between the Republic of Ireland and Northern Ireland, which is part of the United Kingdom. There are concerns the backstop would keep Britain tied to the EU indefinitely and threaten the integrity of the U.K. because it would treat Northern Ireland differently from the rest of the country.

Johnson has demanded that the EU scrap checkpoints and accept that technology or other “alternative methods” can be used to monitor the border.

After meeting with Johnson this week, German Chancellor Angela Merkel and French President Emmanuel Macron said they were open to discussing alternatives but stressed that they considered the backstop “indispensable” to ensuring the Irish peace process and protecting the integrity of the European single market, which allows free trade of good and services for 500 million people.

Johnson left the meetings saying France and Germany are “crucial friends and partners of the U.K.,” and spin doctors sought to capitalize on warm receptions offered by two pivotal EU members.

“Let’s get Brexit done, sensibly and pragmatically and in the interests of both sides,” Johnson tweeted. “Let’s get on with deepening and intensifying the friendship and the partnership between our nations.”

The markets responded to the merest glimmer that a deal — some sort of deal — might still take place. The pound rose $1.22, up from the week’s low of $1.20.

Smiles only go so far. Back in Brussels, EU officials were quick to ask what might be offered that had not been proposed in the past two years. And while Johnson’s team was streaming chummy pictures of his meetings in France and Germany, both Merkel and Macron were stressing that the matter was not just up to them. Other EU nations also would have to agree.

The lack of a breakthrough will make Johnson’s negotiations with another key ally — the U.S. — even more important.

Johnson and his supporters claim that one of the most important benefits of leaving the EU is that it will allow Britain to negotiate its own trade deals with countries, more than offsetting any decline in trade with the EU. The biggest prize would be a free-trade agreement with the U.S.

Johnson plans to meet with Trump in Biarritz as he tries to cement such a deal. Trump tweeted this week that he had already had a “great discussion” with Johnson.

Time is of the essence for Johnson. Not only does he have an Oct. 31 deadline, but Parliament returns in early September. He clings to power with a majority of one vote. But the final poker hand has not yet been played.

“The clock is ticking,” said Georgina Wright, a senior Brexit researcher at the Institute for Government. “We are close to 31 Oct. But we’re not close enough. It’s very difficult at this stage to know what compromises, if any, will be made and how.”